Is this the end?

Do you know I started writing a long post about my year so far? No, of course you don't, because I never hit publish. Honestly, the year has hit like a ton of bricks.

Without making it too sad, I shall explain. We've had severe mental health issues, with my eldest two children, leading to eating disorders amongst other things. Mostly we are coming out of the other side now, but there are still a lot of things to deal with, both mentally and physically. Never brush mental health under the rug, it can lead to so many problems, if not talked about.

Then, very sadly and suddenly, we lost my mother. She has been my rock for many years. She was the only childcare I ever had, she would send me away for weekends, then come to my house to look after my children, so that I could have a break. Autism support is not readily available where I live, she was it. My mother was also the best friend I ever had, I could talk to her about, almost, anything. 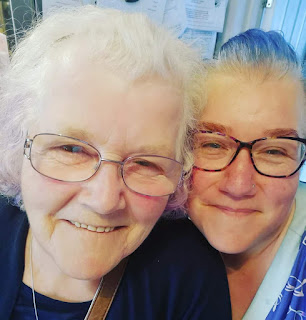 She had been feeling a little sick, then it got worse, I talked her into speaking to a Dr, blood tests were taken.....3 weeks later she was gone. Secondary cancer of the liver, from the breast cancer she had 13 years previously.

Thankfully I was with her at the end. She was made comfortable and it was very peaceful. She even opened her eyes.

I have had days where I simply don't know what to do with myself. Saturdays were so hard because, even though I would speak to her daily, and pop over regularly, Saturday was our day. We would have chip butty's together, bitching about the world.

With all this going on, I still had to home school my youngest.

I felt like I was falling apart, until my husband pushed the idea he'd had for a while. I've always loved fabric, it was one of the things me and my mam had in common (she was far more talented with it than me). My hubby had been talking about me opening a fabric shop.

So here we are. Three months after losing my mother, I opened Mam's Fabrics. There's little bits of her in every corner, I genuinely feel like she's always with me. This isn't an ad for myself, but if you'd like to go give my Facebook page a like, you'll find it here:  https://facebook.com/mamsfabrics .

I'm not sure what this means for Ojo's world, I don't know how much time I'll have to write. I'll certainly update when I do have time.

I just wanted to say thank-you, from the bottom of my heart, for all the people who have read my posts, and followed my story, you mean the world to me.

So see you later, maybe?