The past 24hrs, last night in particular, have been an experience, to say the least.

Being a parent is one of the toughest things you'll ever do, being a parent to a child with additional needs, that's a whole different kettle of fish! (what does that even mean!?). There is barely a day goes by that I don't feel like an utter failure, more over the last day.


Ajax has too many issues for me to go through, in one post, but one of the biggest things we deal with, every day, are his anxieties. Everything worries him, every little thing.

So, to explain a little about the last 24 hours, I'll give you some background. Ajax has some major issues around clothing: he won't wear shorts, above the knee, in case he falls and scrapes one. I actually know where this one started, he fell over, whilst in shorts and cut his legs, he's never worn shorts since.

The issue with socks, no idea where that one came from! He will not be without socks, at all, if he can get away with it. He literally takes them off as he gets in the bath, then it's the first thing to be put on, when he gets out. We cannot touch, or even look, at his feet. The idea of us even seeing them freaks him out. 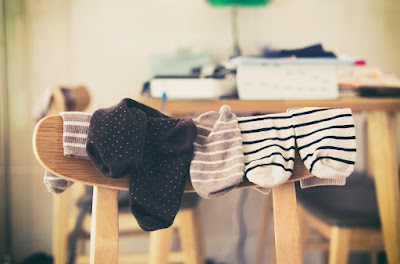 Anyway, the past few weeks, he's been complaining about his toe hurting. We tried to peek, while getting him in and out of the bath, but could see nothing but a little bit of redness. If we tried to talk about it, well you can imagine how that goes.

Back to last night. Hubby talked him into letting him look at his toe, while he was getting in the bath, because he'd been complaining about it hurting again. My hubby managed to get a picture, so he could show me. I'm not going to share it, because it's horrific! His big toe was swollen, red, with a partially black nail.

The only thing we could think of to do, without causing him more upset, was to take the picture to the local A+E. Hubby took it, while I stayed at home, with him still unaware and in the bath. Local hospital took a look at the picture and told my hubby they couldn't do anything (it's a pretty useless A+E), he'd need to ring the out of hours. After a phone call, and a little wait for them to call us back, explaining what his toe looked like, we were told to take him to the larger A+E.

Calm went out of the window, however, when the Dr finally got to look at it. Fair play to said Dr, he did everything to try and keep Ajax calm, it didn't work. He broke down completely, hidden under his blanket, so he didn't have to see anything.

Turns out he has a severely infected toenail. Basically it's 7 days of antibiotics, followed by a doctors appointment that's, going to lead to further hospital appointments, where his toenail will most likely have to be removed. By the time the conversation was over, my poor little boy was inconsolable.

It's left me feeling like the worst parent on the planet.

We choose our battles with Ajax, getting him to school everyday is a battle we have to go through, looking at his feet didn't feel like a major battle. I was wrong.

I'm not going to lie, I've spoilt them rotten today (I had to leave my other boy home alone, until 1a.m. Which also made me feel sh*t).

Then, after a rough night, followed by a day where we were all exhausted, I came home to leftover curry.............and a nosebleed to end all nosebleeds. My favourite dress is now covered in blood.

So I've said 'sod it' to the diet, and consoled myself with a big bag of crisps. I'm now going to lie in bed and do bugger all tomorrow!

Don't ever think you know what a parent is going through, because you have no idea. We feel like crap today, even though no one is blaming us.
Just be kind.