Well, I must say, our first full day in London has been exhaustingly epic! We did the proper tourist type stuff, even though we've visited several times before. In the past we've mostly come as a couple, so this time is a little different.

I thought the boys would complain about the amount of walking, but nope, they've just enjoyed the sightseeing! Obviously Ajax was in his chair, and it's been an utter godsend. He did not complain once, or ask to go back to the hotel. The only time he asked, when we were leaving, was the Natural History Museum, however, we could see RJ was struggling by this point too.

Unusually for me, I shall now give you quite a photo heavy post, of our day.

Our little ones first ride on the tube was a HUGE success! He really surprised us with how much he loved it. Unfortunately, most of the underground is not known for it's accessibility. It did cause some stress and panic, getting up to ground level, but we got there. 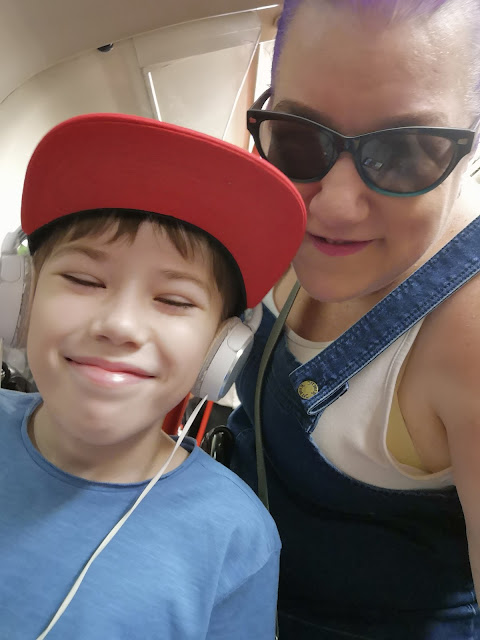 After leaving the tube, at a tube station that was accessible, we walked to the Natural History Museum. After seeing the queue for entry, we decided to sit on a bench and have a picnic, before facing it. 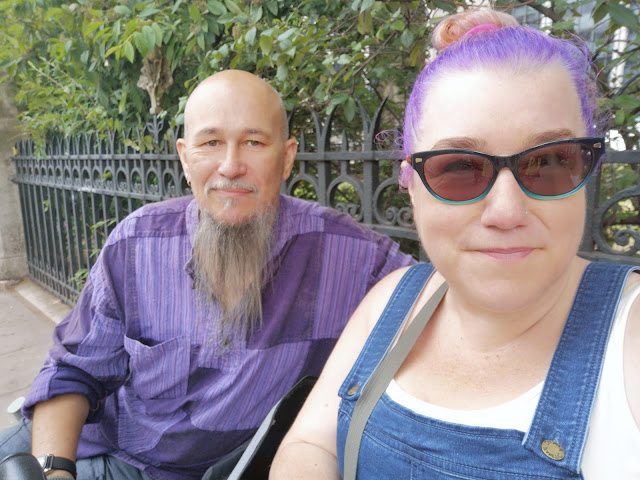 Yes, he is about to tap his dad, jokingly, for making silly jokes! 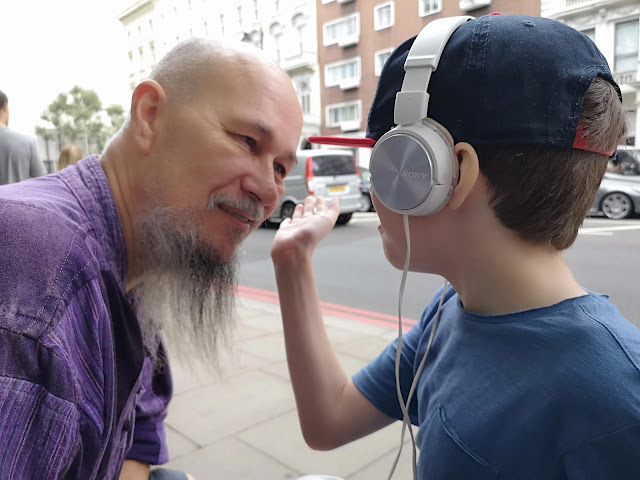 We were pleasantly surprised to be given fast track, by staff waiting outside of the NHM, because of the wheelchair and crutches situation! That made life a lot easier, if I'm honest, neither boy would have coped with the waiting time.

I took loads of pictures and videos inside, here's a small selection. 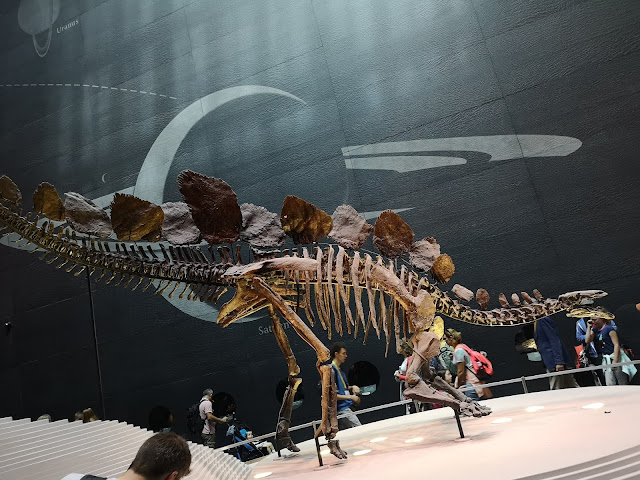 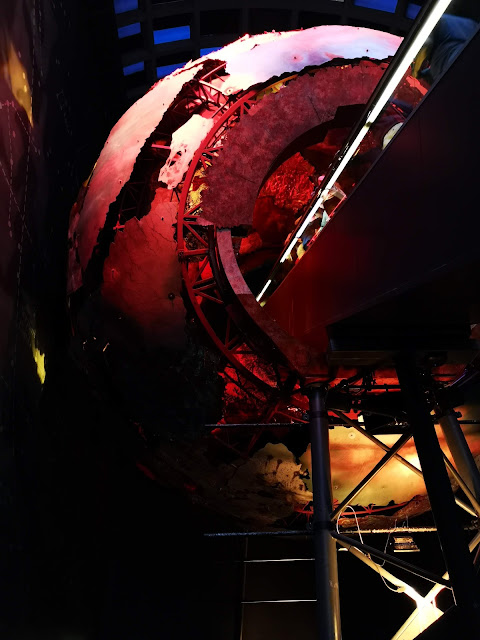 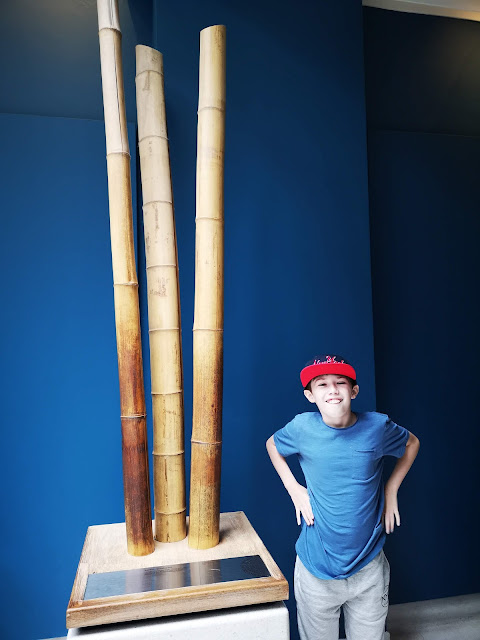 We've called this one HellBoy!: 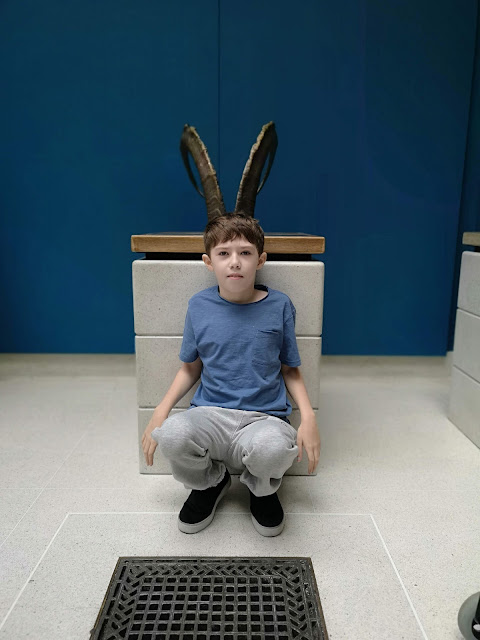 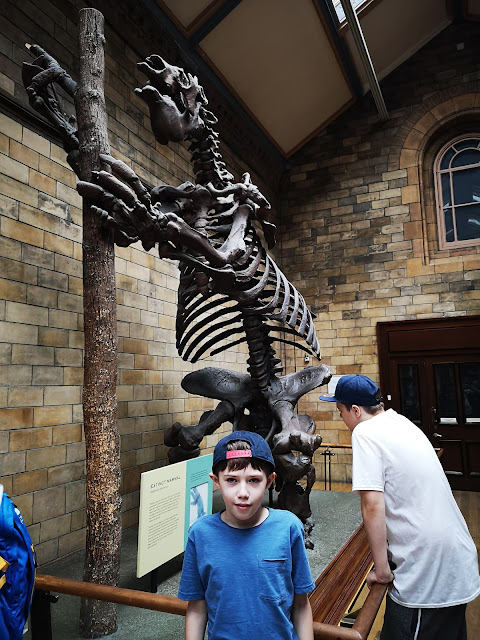 Mr. Ojo found it easier to push Ajax, rather than used his crutches. He found it easier on his back and legs, and stumbled a lot less. It was great, as he was able to take extra pictures too. 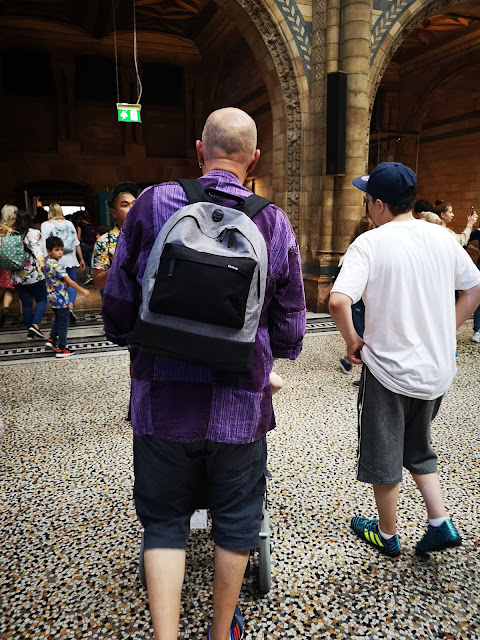 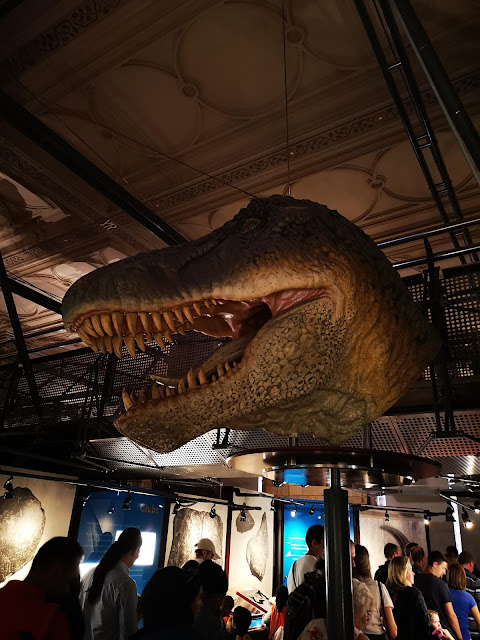 You know it's a good day, when your teen actually allows himself to be photographed! 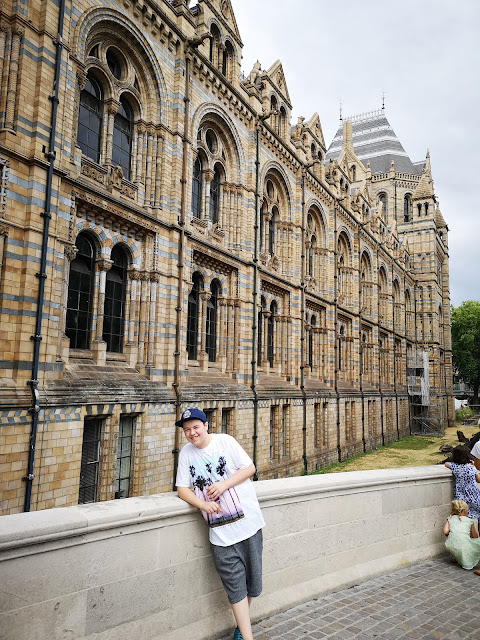 We decided to bus it, part of the way back, as it was easier with the chair. We realised the bus was going by Green Park, so hopped off and walked the rest of the way to Westminster underground. This included passing Buckingham Palace, obviously the camera comes back out for that! 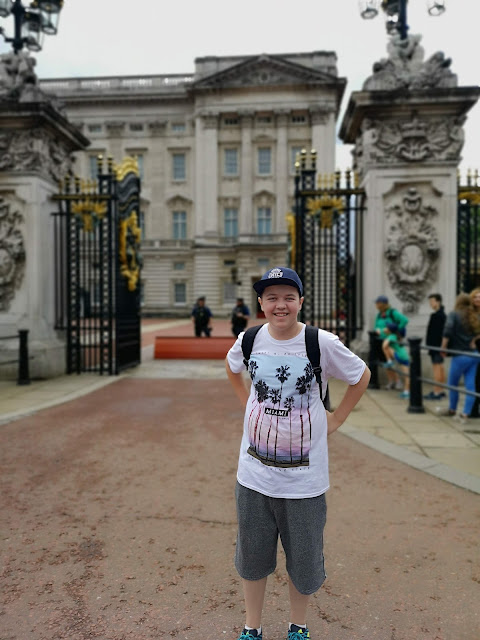 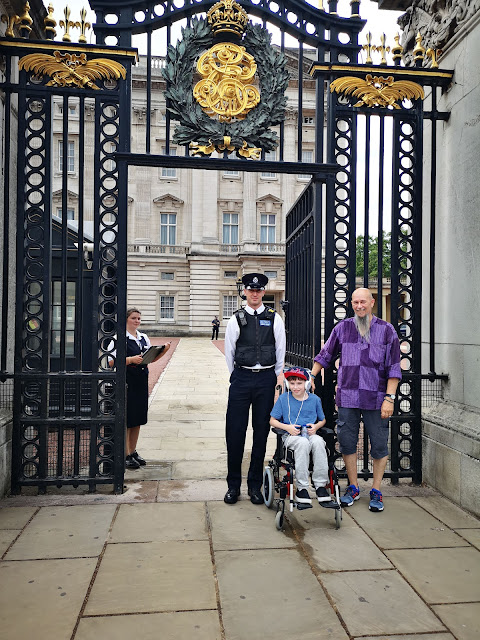 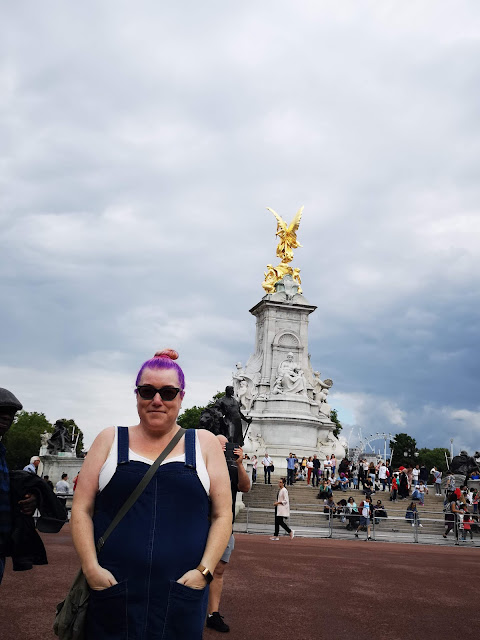 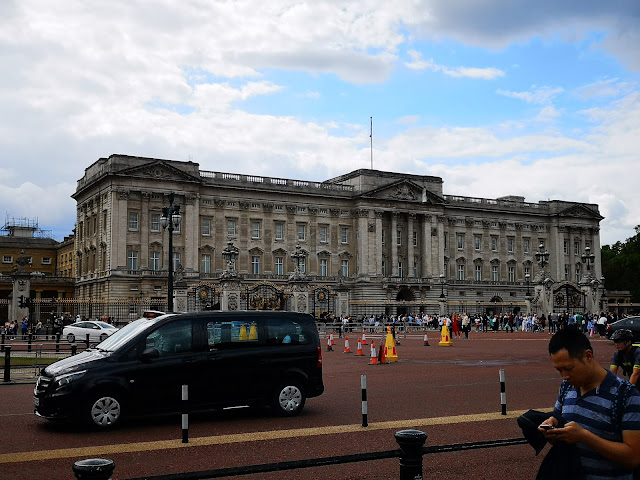 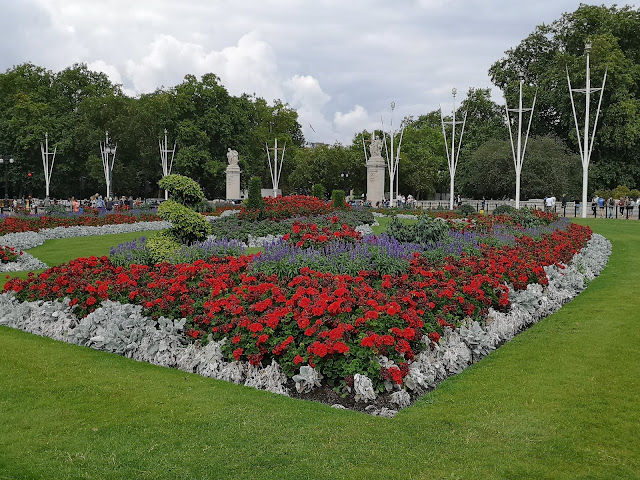 Then a walk through St. James park, where the wildlife was quite friendly! One squirrel almost climbed on Ajax' lap! 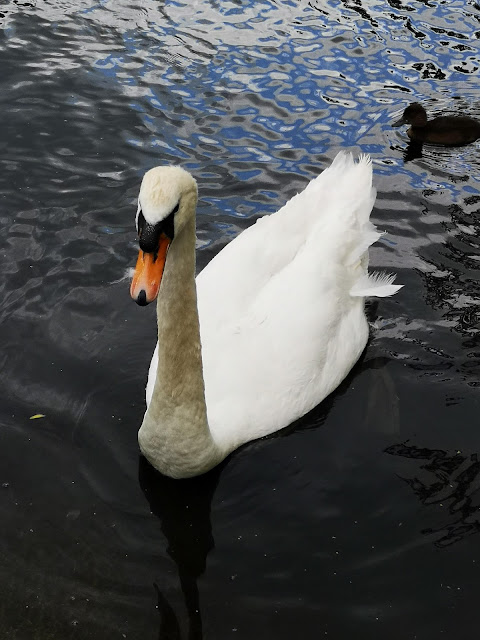 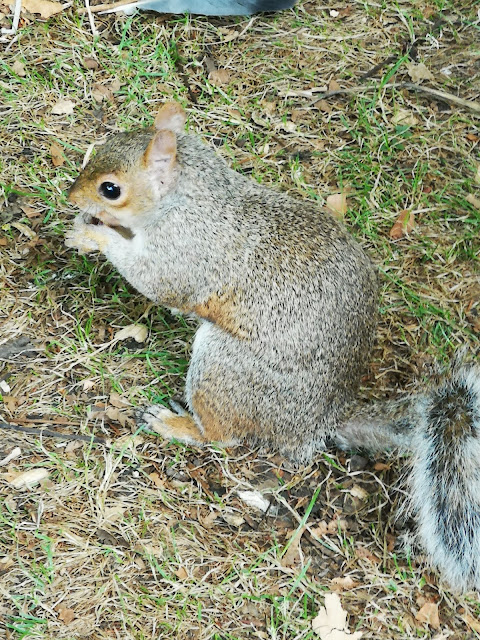 No more photos after that, as we were mostly underground, in shops, or walking.

Needless to say, we are all exhausted, and in our PJ's.
Tomorrow, we are going swimming, in the aquatic centre, that held the London Olympic swimming events.