I was supposed to go to the Doctor today, for yet another blood test result. However, little A has been sounding terrible the last few days, with a cough getting gradually worse. So we decided to phone, and have him seen instead.

There have been a few things that I wanted to get checked on him, but I don't like to take him too often. He doesn't like being handled very much, and it would soon put him off if I took him for every sniffle.
In fact I don't think I've taken him for about 6 months, the last time being for his chest too.

Last time he was given Ventolin, an asthma medication to ease his breathing. After a few checks of his chest, and breathing, the Dr seems to think his chest has gotten a little worse. So he now has to have another inhaler, with steroids, to help strengthen them more.
Poor little thing sounds like he is coughing up a lung, and is not a big fan of the new pump. We will work our magic though, and get him to take it.

One of the other things, is little A's legs. I don't really talk about the physical difficulties that little A sometimes has. People assume, because he li

kes to run back and forth, that he is perfectly fit and healthy. What they don't see is him complaining about his legs hurting, some evenings. Unfortunately he doesn't have the vocabulary to fully explain what's going on. 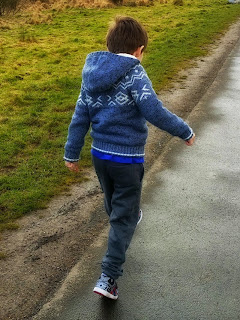 So today I mentioned it, and he is being referred back to the children's physio that he used to see, the doc also seems to think there may be a bit of hyper mobility (which the teen has).

We've also had a problem with bed wetting, for the past couple of months.
It's got to the point where there is little more I can do. He is almost 8 and we are stopping drinks past 7pm, making sure he has a big wee before bed etc. etc. Nothing is working, if we wake him, he won't go back to sleep.
Thankfully the doc is testing for an infection first, then has suggested some medication he can take, to dehydrate his kidneys slightly, through the night. He has always struggled to get to the toilet on time, even wide awake, so I think we may be looking at a weakness in the bladder, but a follow up in 4-6 weeks should let us know where we go next.

I bet you're wondering where the 'ups' are in this post?! My son allowed the doctor to take his temp (he actually let him put the thermometer in his ear!!!!), that is HUGE!
He let him move his legs about, giggling the whole time.
Basically he did not complain, or stop him, once.

This is a really big positive my my little A.

So proud of him today.