After my holiday, last week, I'd had enough. I was miserable and it was time to change that.

Following on from yesterdays post, about time to change, today I'm talking about one of the things I did to change my mood, Saturday.

I didn't go anywhere, I was sat in the kitchen the whole time (at the breakfast bar). I put some Junior Bake Off on the laptop, it really is rather good!

Then I did one of my favourite things:

Just fiddling about with some of the crap I have lying around the house.

I have never used Washi Tape before, but I had some in a goody bag, from one of the events I've been to. Did you know it can make anything look pretty? 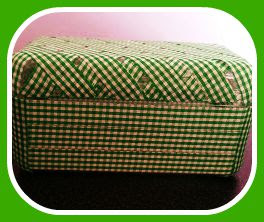 Would you believe, that is a Ferrero Rocher container? It's now a pretty box to keep Mr. Ojo's pain killers in! Much better than random boxes lying everywhere.

Then I went to work on a jar. It's an old storage jar, that I bought from Ikea, a bit of quick drying nail varnish and some jewellery, from a set I was given. The result? All I've put inside is a set of cheap, battery operated, flower lights. They cost me less than £2! I think this one will be going down the summer house.

Following on from that, and having reminded myself I had the jewellery set, I decided to attempt something. I really didn't understand the instructions that came with it, and I'm not one for following them anyway!

So I decided to make a simple charm: 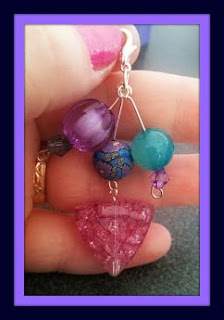 How cute is that? My mum now has it, dangling off one of her bags.

After an afternoon of doing that, I felt so much more relaxed. Almost as relaxed as writing on here makes me feel. So it's one of the things I'll be doing more of, why not?

I ended up cooking dinner, with homemade bread rolls. Obviously, that made everyone else happy. So did the, chocolate orange, cake I made, the next day: This is what makes me happy.
What do you do?
Do you fancy trying something like this?
Or maybe you have some other simple crafting ideas I could use?