The Week That Autism Kicked our Butts

Last week, as a family, we went on holiday. Nothing special you say? No, it's not really.

Unless you add autism into the mix!

If you read my bio, you will see that I have 2 children on the spectrum. Sometimes, when you learn that both my children go to main stream school (the eldest has left, and isn't on the spectrum), it can be easy to think it's not that bad.

Mostly it's not. I have taken the National Autistic Society classes, that taught me how to parent my special children, and I really did listen. I have followed the tactics they suggested, like using time scales and letting them know what's happening and when.

Last week, in Weymouth, that all failed us.

We love Weymouth because it's quiet. There's are fairgrounds and shops, but they are not in your face and over stimulation can be avoided. Basically we can spend the whole day on the beach.

However, when it rains, and you have no Wi-Fi, you are screwed!

We took loads for them to do, but it wasn't enough.

I spent one day, lying on the floor of the caravan, colouring. My youngest child, who is not a fan of leaving the house, didn't want to leave the van.

Without a doubt, it is one of the worst holidays we've ever had. To top it off, the van wasn't brilliant. The doors were sticking, the water pressure was atrocious, so showering was a nightmare.

We went to the same campsite as before, hoping familiarity would help. It didn't.

It wasn't bad behaviour (although there was some of that), it was autism.

We managed one fairly good day. It dried up enough for us to make it to the beach. For a few hours, it was exactly what our holiday was meant to be. 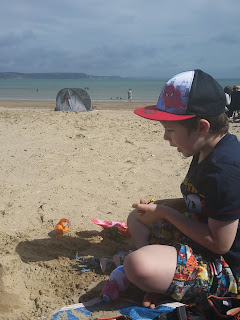 I won't tell you how the day ended, you can probably guess.

I don't think I'll go on holiday next year, I just don't have the energy. I've been left feeling exhausted, drained, and like I failed my children.

What makes it worse, is its probably the last year our teen will come with us. He'll be 18 at Christmas, and this holiday was tough on him too.

This is the first year I've ever come to the end of the school summer holidays, sort of,  looking forward to then going back.