I know the problem, not enough hours in the day and other hobbies, mostly sewing. Give me a few hours to myself these days, you are likely to see me heading for my little sewing corner in the conservatory (which is getting bigger all the time).

However, I have read a couple of good ones in that 10. If you followed my reviews last year, you will of learnt 2 things about me:

1. I love crime thrillers.
2. I hate giving away too much plot.

Therefore, I shall give you a quick review of the books I've read. Mostly with my opinions and a brief synopsis, don't want to spoil it for you!

I do enjoy these books, but I feel you have to read them in order to get the full effect. They could be enjoyed as stand alone, but I don't think you would  understand the main characters as well, if you didn't read them all. I started them in the 2013 challenge, and still have more in the series to read. I needed a break though, as enjoyable as they are they are not brilliantly written.
These books are about a detective, Lorne Simpkins. After leaving the force, in previous book, she is now back and chasing a violent gang of thieves.
Foul Justice does not pull any punches, and can be a tough read sometimes.
By Guaranteed Justice, she has left the force. She now owns a pet sanctuary and is working as a P.I. I'm sorry, but this is where my love affair with Lorne ended. Although the book has an excellent crime thriller base, the rest of it is simply a bit silly!

This wasn't done as on purpose! It just fell that way, my next 3 books, not related to one another, were all Mr. Patterson. I am a HUGE fan, there are very few of his books that I have not read. Those that I haven't, I will get around to!
Gone was a follow up, in the detective Bennett series. He is a father of 10 adopted children, with an Irish nanny for his children and a Grandfather that's a Priest. In gone, we catch up with the family in Witness Protection. It's a good book, but not great, it felt a bit laboured. The last book, which gave you the reason for his current status, was a real 'edge of your seat' thriller, this one.........not so much. Having read so many of these genre, I kept guessing what was coming!
Unlucky 13, was the 13th in the series of the Women's Murder Club. An excellent read, lived up to the rest of the series, yet could easily be read as a 'stand alone'. Although, as a big fan, I would suggest you read them all.
Guilty Wives was AWESOME, absolutely Patterson at his best. His story of 4 women arrested for murder, whilst on a girlie break in Monaco, is so full of twists and turns. With really strong female characters, well worth a read.

Watch Your Back by Karen Rose

Karen Rose writes such a gruesome, graphic tale of crime, mixed with the raw emotion of uncertain relationships. This is more of the same.
As far as the couples go, you know what's going to happen. If you haven't read before, give it a go. But be prepared, she really is an awesome crime writer, and will draw you in. Sometimes I wish she would leave the 'tortured soul' main characters alone, but I just love her books, so I'll forgive her.

The Other Daughter by Lisa Gardiner

This is the first of hers I had read, and was truly gripped right to the end! I would highly recommend this if you love a good thriller. The story is based around a girl, who is left at a medical centre age nine, with no idea who she is or where she is from. She is adopted by the Dr who works on her, who's own daughter was kidnapped and murdered.
That is as much as I am willing to tell you.
Just go buy it! Buy it now: 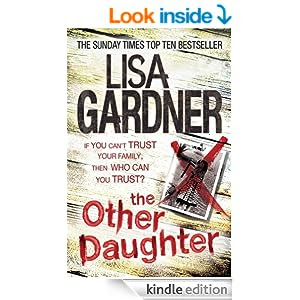 A woman wakes up in a dungeon. She has no idea where she is, or how she got there. When she manages to escape, will anyone believe her?
An excellent read, that throws you off all the way. Glad I found it on my kindle!

So that's it. I shall probably be starting book number 10 this evening and I promise to try harder for the rest of the year.

Do let me know if you try any of the books, or if you have any other ideas for me. I am always open to recommendations.