This will be a year when my biggest boy will be legally old enough to drive (how the hell did that happen?!)
My talented tween will start the local Comprehensive (can't even think about that at the moment, petrified!)
And my baby, yes I know he is soon to be 6, will continue to strive and amaze people.

But that is what's to come, what about what has passed? 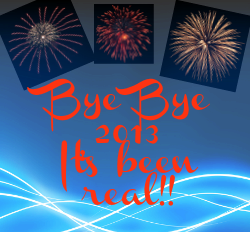 There have been major ups and downs this year, it's been emotional to say the least. I am not going to link back to previous posts, if you want to read them, they are all there, ready for your perusal. I would rather just talk about how this year has been from this perspective, sitting with a cuppa and thinking back.

We had some major hurdle jumping, as far as little A went. He went from a child that would not go to school, however hard I fought, and was still in nappies at age 5. To a boy that strolls in without a problem (as long as he is a little late, he can't stand all the parents around him). This summer he finally got the hang of using a potty too! This was so massive for him, it proved that what I had learnt through my early bird training (a class set by the National Autistic Society) was spot on. He will get things, they just might take a LOT longer. We start 2014 with a chemical toilet under the stairs, the next step to using a proper bathroom.

My other boys have changed so much. My teen is unbelievably mature and thoughtful, although he still does the teen thing of festering in his bedroom! He goes into 2014 thinking about his GCSE's. If he keeps working the way he is, he should do well. I continue to work on his self esteem, but until a girl his own age sees how wonderful he is, he won't believe me!

RJ continues to be a bright spark, he loves to sing and play music. Unfortunately he is a big video games addict, I really struggle to get him out of his bedroom! He really would stay there permanently. Thankfully, once the weather turns he is out on his bike so, hopefully, we will get some dry weather soon!

Now the biggy, a look back at the year of me and the Mr. This one may surprise some of you, as we are a very loving couple. This year has been a struggle for me, though. I have found the 'being taken advantage of' a little hard to deal with. When mothers day came around, and there was not a single hand made card, I was heartbroken. There have been many highs, but as Mr. Ojo's job got harder this year, his moods got grumpier. He became very difficult to live with. I have really been finding my place this year, and am constantly being told to 'think of myself'. Well by about August, I had realised that I was miserable, and the only thing making me miserable was my marriage.

For the 1st time in 24 years I seriously considered leaving the man I love. Yes I did still love him, but he was making me unhappy, at 40 I felt I didn't want this in my life. I didn't even feel we could talk about it anymore, he didn't see the problem, I did. I was genuinely planning this as our last Christmas, as a couple.

Thankfully, a few weeks ago, he got offered a change of shifts. His new hours meant he would be doing the same amount of hours, over more days. He would be home nearly every night for tea! The change in him was immediate. He was like MY Mr. Ojo again, the man I didn't just love, but was in love with.

Now we can talk, and we really have. Quite frankly, the Mr was shocked, he really hadn't realised how close we had come. Now, it's lit a spark that neither of us had realised had gone out. We start 2014 having a weekend away, in Weymouth. My mum is staying at mine for the weekend, with my boys. Quite honestly, I can't afford it.........but I'm going. We need this, it will be like adding the final piece of the puzzle, making us complete again.

I didn't let on to anybody how bad things had got for me, until they got better. So I want to leave you with 2 pieces of wisdom I have gathered from the last 12 months.

1. Don't give up. Even the hardest things can be fixed and worked on.

2. Talk! Just talk to someone. I had friends who would've listened, but I didn't want to 'bother' them.....If they are real friends, they will tell you when you are bothering them!