For many of us today, Christmas came to an end. In our case, little A fell asleep on the floor last night so that's where I slept with him. Then today hubby went back to work.

The sneaky clean up has begun. Half the window trimmings disappeared, without any of the boys noticing. Corners were found and empty boxes were thrown out. I won't take all the trimmings down until New Year is over, I do like to tone it down a little though.

Actually, yes. It wasn't too bad. I was very careful about what Santa gave them, so each child got what they wanted, but didn't get too much. The eldest is over the moon with his concert tickets. The tween has been lost to his Hudl, since he opened it. Little A...............has completely ignored his main present (an electric quad)!!! However the abundance of Lego has been a huge success.

The day itself was very quiet. I thought we were going to get away without any upset, until it was time for dinner. Little A went in to full meltdown............because US eating would ruin HIS day! It took most of our meal for him to calm down. When he did, it was like this: 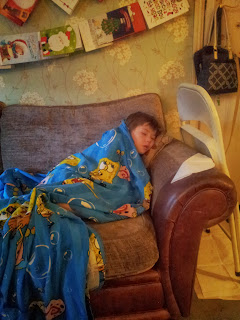 For the rest of the night, the slightest little comment was received with a 'you ruined my Christmas'. But we dealt, it was obviously going to be extremely stimulating for him, however calm we tried to keep it!

Apart from that, it was a fantastic day, with 3 very happy boys. 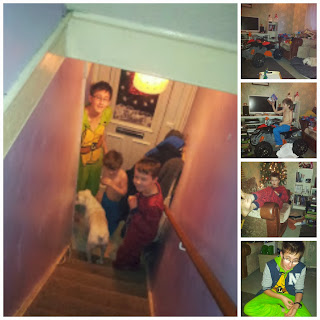 Of course, Boxing day was the teens birthday. I wrote my Special Reasons to be Cheerful yesterday. He was spoilt again, with a voucher for his favourite shop. Scratchcards in each birthday card..........which won him £20!! Jammy bugger! Plus, at some point in January he is going to do a Bungee jump, through choice, crazy boy.

We took him out to dinner and I made him a cake. Which, quite frankly looked atrocious, but it was what he wanted and has been tucking in since, so it must have been OK. 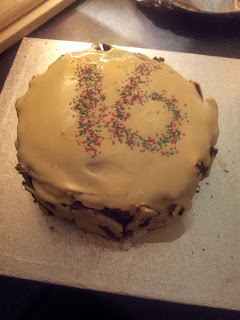 I do hope you all had a very Merry Christmas and that your New Year is as you want it.

Email ThisBlogThis!Share to TwitterShare to FacebookShare to Pinterest
Labels: autism, christmas, pictures, round up