Emptying the Trash Can

I am about to throw a very random blog at you today. You see I haven't been able to write properly for nearly a week. Today I figured out why!

The last couple of weeks, so much has gone on. So much that I have had an opinion on, and it's built up. Now I don't know where to start! My brain is so full of crap that it can't be contained in one post. I would need about 5. So today I am emptying the Trash Can, you know, like when your computer gets too full of useless info. You put it in the waistbin/trashcan icon, then you empty it out, into the digital rubbish tip. 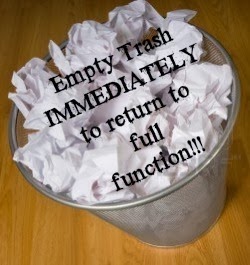 So where do I start?! Ugh, my head is so full of crap! Do you know one thing that has bugged me a little? Miley Cyrus, but not for the reasons you'd think. I am coming at this as a mother who tends to listen to music, more than watch it (even though VH1 is on, while I type this). I like her songs!..........I'm sorry! Don't leave yet! Everybody is going soooo crazy about the 'twerking' and the lack of clothes, and I have to say, I find it hard seeing Hannah Montana in the nuddy. However, the songs are good.........Yes, really. I have a very eclectic taste in music, I will listen/singalong to any genre, that's just me, I am loving wrecking ball!
As for the rest, does nobody remember Christina doing Dirrty? Or Britney shaving her head? It's a right of passage for the Disney princess, I'm afraid. How they turn out from there, depends on the people they have around them. (By the way, I CAN twerk.....ha!)

Weight loss and exercise has been on my mind a lot. I am trying to achieve 10,000 steps every day of November. It' s pissing me off already! I won't lose weight, I never do. What gets me more than anything is it's only me.............no one in my house is shifting their asses! I am up on my feet, nearly every night, dancing, moving, generally getting my heart rate up and my body moving. They just sit in their rooms or on the sofa and watch me! Grrrrr.

Obsessions. There's a full blog coming on this. Basically RJ slipped through my net and disappeared into his obsessions. I am currently fighting back and it is not easy.

When I thought there was no more crap that could fit into my head, I find that 'someone' has thought paying mums to breast feed was a good idea!? What the actual f##k. Breast feeding is a deeply personal thing, parenting is something everybody does different. I am not going to chastise someone for doing something I don't agree with, unless that child is in any sort of danger or physical harm (Then I'll rip your arms off and beat you with them). So why is paying someone to parent a child OK? And what about those that can't BF themselves. I couldn't, my milk didn't come on KJ. It did on RJ, too late though, he was already on the bottle, and very happy about it. Then we came to little A, I had a go, for about a week it worked. Then it was just too painful. He was, after all a 10lb+ baby, one night he was on there for almost an hour, I simply couldn't cope. One thing you may of noticed missing from all the feeding attempts........SUPPORT. I had none, not a dot...........THAT is where the money should be going!

My head is also full of making things at the moment. I feel lost if I don't have some sort of needle in my hand! I had no idea I was creative, it's not something I have ever been encouraged to do. Turns out I'm quite good at it, people are telling me I am good at it!!? Real live people are paying me compliments! The problem is, my living room currently looks like a crafting jumble sale!!

Last thing, then I think my brain may function as normal, for a while (go on say it, badly).

Rude songs and extreme computer games.......Oh this riles me so much! So a video has naked woman, or a Xbox game is too violent. This is my view............YOU ARE THE PARENT. ACT LIKE ONE!!
My 10 year old wanted GTA(whatever number they're on) I said no. Simple as.
I told him, when he is old enough to play it, he will be earning his own money, he can buy it himself. Now I know it's hard, when their friends are having stuff they are not. I don't say no to everything, I am not going to make my child stand out as too different, but I am going to teach them to be individuals, they are not sheep.