If you read this blog regularly, you will notice I don't do a huge amount of reviews. I have done them, I believe, if it's relevant to me and my family, I will, but mostly this is my online diary!

However, this was a review that I could not turn down........Lego Land Windsor!!

In one form or another, my boys are mad about Lego. RJ loves the games, Lego star wars was played constantly on the wii. Little A loves making things, Lego hero factory and the monster fighter ones are his main obsession. Even the teen loves it! He is usually roped in to help little one put things together (not that he minds).

So obviously Lego Land, to my boys, is the equivalent of Disney, that's not an exaggeration!

My biggest worry, and what stopped me taking them in the past, was how they would react to all the stimulation. The 2 younger boys really struggle in busy places, we tend to avoid amusement parks. We were invited 'off season', the end of September.

Even though it was a Sunday, it wasn't  crazy busy. We found the longest queue was the 1st one we joined, for a water ride, but even that one was very quick moving. We were on the ride within 15 minutes.........and soaking wet within 16! There are signs with each ride, telling you how long to expect to wait, we found nearly every one of these to over estimate. I also loved the fact that, there wasn't a ride that little A couldn't go on. It's horrible having to say no, when his brothers can do something, and even harder trying to explain why. I didn't have to do this once!

It's the detail of the place I loved though. There are little figures scattered all around the park, RJ loved posing with them all! The star wars section is incredible. All my boys were blown away in here, it really lived up to what little A was hoping for, even KJ was impressed.

Things did get a little much at one point for both the youngest, but we were able to sort it out thanks to a Lego Hero Factory room, where little A could sit quietly and put together his own Hero, with all the pieces supplied. He didn't even mind leaving it there, as long as we took a picture! While he was doing this, I took RJ off outside, alone, where he got to go on a ride alone. It was kind of like one of those space rides, where you ride up and drop down. Except on this ride he got to pull himself up! He loved it, and it got some of his anxieties out, nothing like an energetic 5 minutes to calm a child down!

I didn't find the food too expensive, it was £11.95 for adults, however.......it was buffet style, so you could fill your boots! With my boys, that is a real good thing! The shops for toys were no more expensive than buying them from any shop.

However, I would suggest, if you were going with younger children, take swimming clothes and a towel. The Duplo water park bit, looked fantastic! Unfortunately we didn't know we would need a change of clothes and a towel, and at £20 for a pair of little trunks.......well he didn't get to try it! It was the only shop I found overly expensive.

All in all I found it to be a thoroughly enjoyable day! If you're like me, and have children with different needs, you know that you may have to leave at the drop of a hat. This didn't happen until an hour before the park shut! I was over the moon, I genuinely cannot remember the last time we got to spend 6 hours at a place!

As far as our family goes, I would give Lego Land Windsor a very happy 8/10. I cannot imagine we would cope during the summer, the top of the season, with the heat, the noise and people. But this time of the year, was great. Some of the Staff could have been a bit more cheerful, but 75% of them were lovely.

I know they have a new press release coming, regarding October half term and Bonfire night, but for now I will leave you with their current release, about what's new in 2013. Also some of the MANY pictures I took that day.... 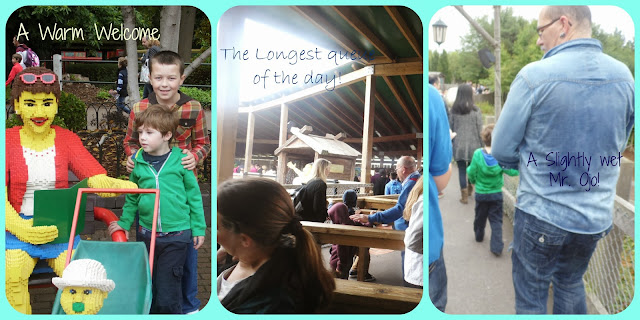 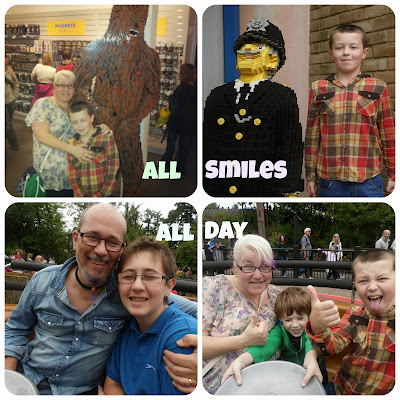 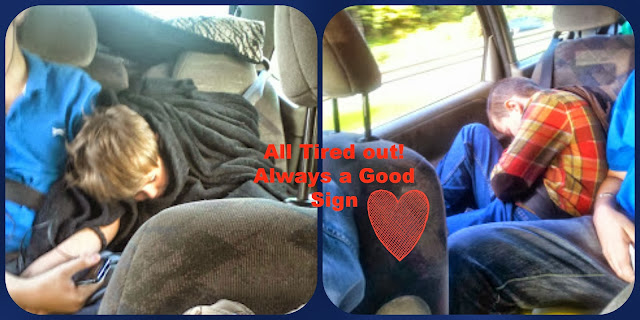 
Lego Land were kind enough to give me, and my family, free entrance
for the purpose of this review.
Posted by Ojo at 9:27:00 pm