Here I am, laying down the gauntlet!

Is anyone out there as crap a parent as me this holiday??

Bet you're not, I have had just about enough already.


Eldest boy has gone away for the week with friends, for a fun packed, disco filled, theme park visiting holiday. Basically the type of holiday he won't get with me...

Middle boy has camped out in his bedroom, only to be seen when hungry or (this is a good parent bit), if it's dry, out on his bike to the local park, with friends.

Little A has basically moved from one screen to another. Whilst I'm typing this, he is on his 5th showing of Ice Age 4........in the last 2 days! (The joy of Autism). We have also watched The Incredibles a few times and, my favourite, Hotel Transylvania.

Whilst doing that he has also managed to watch stuff on YouTube and play with his new TMNT action figures. Who said the male of the species can't multi-task?!

On the upside, he is dry now! We had 7 ticks in a row for dry days, so he now has a new figure to add to the collection.

I am not going to lie, I feel like a lousy parent! I just can't get them to engage. We have managed to sit at the table and do a bit of playdoh, for a few minutes. I even took a picture to commemorate it!....... 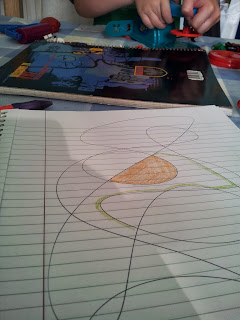 The problem is, I can't manage to go far with my youngest 2. They are both wanderers, if I am on my own I would need eyes in my ass, hair, feet and elbows! Little A won't walk anywhere at the moment! So we have to take his pushchair everywhere, which I thought we had grown out of, alas no.

RJ will talk to anyone. I am on pins at the moment, letting him out alone. Thankfully he is with good friends that I know won't leave him.

On top of all that, little A is going through a phase *sigh*. He won't be in any room alone, not by day or night. Even if he is watching T.V. and I nip to the loo, he will go into a panic, calling for me, then coming in to the bathroom with me.
Even at night he is waking in his own bed, alone (even though he does share a room with RJ), and screaming the house down in panic, until we call him. Then he climbs into our bed and goes back to sleep.
I don't mind the sleeping in our bed so much, but he is getting quite big now!

So is anybody else managing as utterly uselessly as I am?
Go on, make me feel better, at least!
Posted by Ojo at 5:04:00 pm