I thought after all the doom and gloom I've brought lately, it was time for some good news!

I have tried, failed, stopped.......cried and worried!
Then one of the professionals I used to deal with told me, quite simply, he wasn't ready.
I worried some more.
He started school, still in pull ups. Still with no awareness of what was going on.
I worried a lot.

I had decided though, not to do anything for a while except talk about it. So we did.
We talked about it a lot! Every day.

However, we never asked him to do anything about it, just explained what was going to happen when he was ready. We talked about doing it in the school summer holiday, that way it was just me doing it with him, meaning no confusion for little A.

The Saturday just gone, we put him in big boy pants, over the weekend he wet 6 pairs of pants and 3 pairs of trousers. We were over my mums Sunday, for an afternoon in the garden. While we were there, we ran out of pants, so we had to put a pull up on him, there was no other option.

When we woke Monday morning, we have no idea what happened, or why it happened........It just happened!
We had part of a big, toilet type, potty, downstairs. Little A just pulled 'it' out of his pull up, knelt down...and pee'd in it!? We were bouncing!! He wants to keep his pull ups on, but they have now been mostly dry for 2 days. We had to go out yesterday, and I don't think he is fully aware he needs to go til last minute. By the time we found somewhere to stop it was too late, but we just let it slide. I think the pull ups give him some reassurance, that not everything has changed.

I simply couldn't be happier, or more proud, of little A. At 5 years and 6 months, He just got it.
All day today he has gone anywhere, bar his nappy!

On top of all this, I have 6 weeks of lie ins! I have my holiday to look forward to.
And, today, I had a treadmill delivered, so I can exercise without worrying that my ankle with give way! I worry, my hubby worries more, that I will be out on a walk and it will seize up (which it likes to do). Then how do I get back, this way I just sit down on the sofa! Sorted!

Doesn't even come close to my little boy getting the whole toilet situation though!
I am a very proud autism parent..... 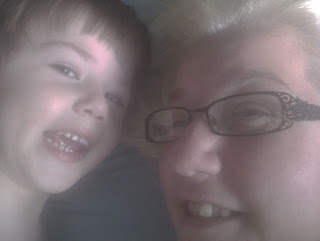