I write many posts about the different levels of understanding my children have.
My teen knows right from wrong........I hope. He can be moody and temperamental. Mostly he knows how far he can go and he knows that, whatever he may hear me say sometimes, that he is not to swear in the house.

RJ is as anti swearing as you can get! He will tell complete strangers how terrible their language is! I have on many occasions told him that it is a choice people make. That it is bad language and maybe no one should use it, but sometimes the situation gets away from you.

Lets me honest, fiddlesticks doesn't cut it when you've just stubbed your toe on the door frame!

But, no go, he does not like it, and won't think twice about telling on anybody that does.

Now little A has become a different story again.......

At first he thought if someone was 'swearing' they were just being naughty. For example if someone wasn't sharing a toy, he would tell me that they were swearing, because he wanted the toy!

So we changed tactic and explained that some words were not nice things to say, and that little boys shouldn't say. This seemed to make sense to him and he will rephrase his sentence if I explain that the word he has said is 'not nice'.

However, so he can make sense of things, he has to process them slightly differently.

So when he walked into the bathroom, whilst his dad was in there the other day, he quite frankly said..
"dad.....I don't wanna bugger off"

Go on, admit it, you just smiled didn't you??

So we have the discussion again.
However, this time it seems to have sunk in!!

At least, I think that's why he was going around telling me and his brothers, last night....... 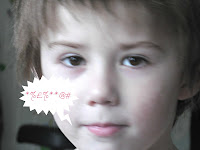