It comes from something that was said to me when I was young. It was said by someone very close to me, and not meant to be in any way mean.


That's it, that's all I remember from that sentence.
It could of been followed by the world beautiful, gorgeous. I don't know.

I just remember being told I would never be 'pretty'.
But I'm a girl, I want to be pretty!
I have always had a terrible habit of remembering the bad much easier than the good.

Me and the Mr. were discussing glasses today, he now needs to wear them permanently. I always wear mine, but originally I didn't need to. They were needed for distance only, but over time, I've become extremely dependent on them, and now never take them off. About a year ago I had contacts, I even had a monthly delivery and a standing order.
I've cancelled it now, as I find it hard to leave the house without my 'mask'.

Yes, that's what they have become, my mask. They hide part of my face.

I've made no secret that I don't like the way I look. I'm possibly lacking a bit of confidence because of it.

But, is it because I'm not pretty? 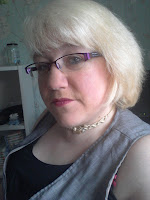 What is your opinion of pretty? Does it make you think of girly pink and flowers?
Or is every girl/woman pretty?
Posted by Ojo at 2:03:00 pm