This was one of our days out while we were away, and a wonderful day it was.

As I have mentioned it was bloody cold! This day was one of the coldest in my opinion, but probably felt worse due to being out in it for quite a while.

Sea Life was situated close to the beach in Weymouth and surrounded by other attractions, some of which weren't open as it was too early in the season.

We managed to get a discount on our tickets as we checked with the receptionist at our Haven site before going. It is always worth doing this, as most Campsites have links with local days out. Add to this, we don't pay for me, as I go in as little A's carer. In the end our day cost £44, which these days isn't a bad deal for a family of 5.

On entering, you see the box office. I don't know if it is because it was quiet, or if it is a normal deal, but we were offered tickets to the Sea Life Tower! This is about 30mins walk from Sea Life, so they also offered us tickets for the Land Train to take us there. None of this would be charged, so we had quite a day for our original spend!

This is my children meeting the various creatures!

At one part you have the opportunity to walk across a mini waterfall. It seems to be controlled by the tide, and you don't really know its coming until you hear the water..........then you have to be quick!! 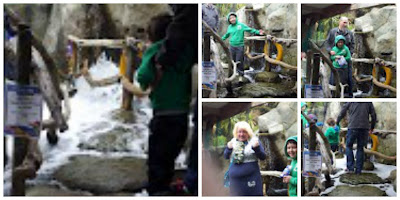 You can just about make out the Mr. stopping little one from going as the water came pouring through!
It really is fun, and very entertaining watching the mothers desperately trying to avoid getting soaked (me included).

We didn't get all the way around as Little A was getting a bit overwhelmed. So we decided to take advantage of our other tickets. Just outside the entrance, and across a road, is the station for the land train. On arrival we discovered the train was due in half an hour. The Mr at this point, decided strolling along a beach, towards the tower, until the train, and us, arrived at a pick up point at the same time. We all went along, mainly because A was refusing to walk anywhere other than the beach.

We walked for about 15mins, by which time we were.....absolutely Bloody Freezing!! I did manage to snap some pics, I am unsure how as I had lost all feeling in my fingers! The last picture is finally on the train!

The train took us on to our final adventure for the day, the Tower. Now there are very few pictures of this, for the simple reason...........I'm Terrified of heights!! I put a very brave face on things, I hate to instill my fears in my children. The Tower goes up approx 50 metres, then rotates! It is a fantastic sight, and on a clear day you can see for miles.

Personally I couldn't tell you, I think I had my eyes shut.

Over all we had a pretty fantastic day out. We were glad to get back to our van and put the heaters on, but none of us minded. I think the next time I head to the beach I would prefer not to need 2 coats!

No one has asked or paid for me to write this post, I just wanted to share a brilliant day out we had. I'm off back to the same place in August, and hopefully there will be less clothing!........
.ahem! Behave!
Posted by Ojo at 10:55:00 am