Before I write this I would like to point out, this is my view of parenting an autistic child. Every parent will have a different opinion, a different approach and a very different child! All parenting is different, whatever your child is like.

I haven't really written a post like this before, simply because I don't think I have it that hard. I'm just a parent.
I had a work colleague a few years ago that had young twins, I remember asking her how she managed. I couldn't imagine looking after 2 babies at the same time?! She simply said 'I don't know, I just do'. Simple as that. I didn't truly understand that statement until little A's differences became obvious. Now I often get the 'how do you manage' question.

I just do! They're my children, I love them, there is no 'manage' just love.

Do you want to know about getting them up and ready for school in the morning?

I can't wake them too early. You see the middle boy, RJ, HAS to be organised, he's the one that ticks all the boxes for aspergers, but I have to jump through stupid people hoops to get him properly diagnosed, and quite frankly I can't be arsed.
Little one, AJ, can't be told too much about whats happening, or he will get distressed and refuse to leave the house. So to leave the house by 8.55 for school I have to wake them around 8.15!
I have to have clothes ready for them, as RJ gets very wound up if he cannot find something, and AJ needs me to dress him while the T.V. distracts him, if he realises I am putting school clothes on him, he will start telling me he's not going.......and he won't.
RJ has a chart that he follows, because I learnt through early bird that I was over prompting him. So now he follows his chart and gets stuff done in an organised manner. This means I can focus on AJ, coaxing him to eat his breakfast, dry cereal.
Whilst breakfast is being eaten I get their sandwiches made, its the same thing every day, so its not difficult. For RJ its only on Mon + Thurs I do this, he has had school dinners on the other 3 days, pretty much every week for the past few years.

Now I have to get them out of the house. This involves being ready with the remote control, to switch off the T.V. the minute whatever Disney programme I'm using finishes.
I do hate it when they change the schedule, it really screws up my routine!
As the end title + song are playing, coats are going on. As soon as its over its 'all finished', switched off and we are out the door. We still don't say the S word, as AJ is kept doing one thing at a time. For now we are leaving the house, then we are walking up the road........etc.

This is where I need eyes in my ass, as neither of them really pays attention of where I am. RJ will march up ahead, thankfully he really took on board the 'roadsense' lessons they did in school. He won't cross the road if a car is visibly moving, however far away they are, but I would rather that, than him running in front of one that is too close. AJ has no awareness at all, but because we walk the same way up the road every morning, he has learnt where the 'marks' are, the places he has learnt that he has to stop. Snow is the devils work for me!!

Once we get to RJ's school corner, its kisses and goodbyes, and we go our separate ways, RJ straight through the gates, me and AJ across the road and through his gates. By now, I think, AJ knows where he is going, but because we've taken it one step at a time, he accepts it. I haven't tried to overwhelm him with info.

My eldest boy, in case you were wondering, leaves the house for school just before his brothers get up. If he doesn't........well he will end up being late for school. They demand his attention as much as mine.

So that's a typical morning. Unless of course, AJ decides he's not going, then I'm lucky if I get him out of bed by midday. Or its RJ's guitar lesson day, then he's distressed from the moment he opens his eyes.

So many little things can affect either of them in big ways. Its why i stay in bed when the hubby's off or starting late.
A. he has more patience than me
B. He is a change to routine, but he is strong enough to pick AJ out of bed and dress him, I'm not.

This is a typical morning for this autism parent 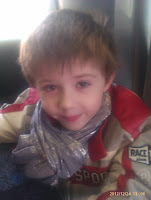 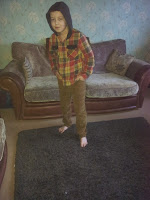 This is what Autism looks like, and I think it's beautiful