In the UK all our major holidays are coming to an end and our minds are turning to the biggy......Xmas.


As an autism parent I've been thinking of Xmas for quite some time. I might also add that all three of my sons birthdays are before the end of January!

I have to plan so many aspects of Xmas. Lets start at the beginning.....decorating. I have to plan a time when my hubby is not working too late as he has to get the trimmings down from the attic while its still light, then hide them away. We can't put the trimmings up when the two youngest are awake, they can't cope with the mess. They don't mind the change in surroundings, in fact they usually love waking up to it, this is why we also try to do it on a weekend, so they don't have to leave it to go to school!

Next is the worst bit......the presents. I spent one year, when R was little, carefully looking through his Xmas list. It had been put together by him and his big bro, with some supervision from us. Everything I shopped for came from the list. Granted, we only had two children then, and I was working, plus we didn't realise why R was so difficult at the time. So we went a little overboard!

I was heartbroken, and have honestly never forgotten, or got over, it.

When little A came along, with all his differences.....and experts, we had advice. One of the key pieces was.....don't over do it, don't overwhelm them.
Lesson learnt, believe me.
So now I completely ignore the Xmas lists and look at my children. I have to look at the interests and obsessions they've had in the months leading up to the holidays. Decide which I want to encourage then shop accordingly. I also don't buy much. With the gifts off family members it can become WAY too much.

I just can't be doing with any frowns or other looks at Xmas.
Yes little A will eat with his hands, and yes he probably will have potato waffles and a Yorkshire pudding as a meal. R probably will talk at a hundred miles an hour all the way through........
get over it or go away!!!

On top of all this, none of them will probably go to sleep until early hours of Boxing Day as they will be over stimulated!

Then we have all the craziness again: Boxing Day is the teens birthday!!

So if you wonder why I've been getting organised for a while, there it is!

Enjoy the season folks, I'm getting ready to...... 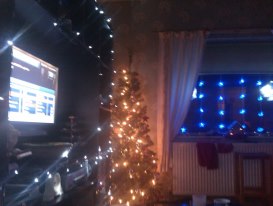