How can something so angelic be such hard work??? 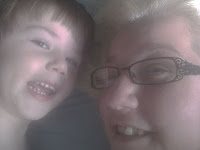 Yesterday I was counting my blessings, today........bluegh!
Don't get me wrong I have many blessings, and I'm grateful for every one.
Today, well that started shit! We all slept late, then had to run around to get ready for school. This is never a good idea in our house, as I may have mentioned, several million times, we need routine!!
This morning we didn't have it, it ended in us dashing out of the door just about on time. I sensed that things were going to be difficult, but we got out of the door, always a good start.
We got most of the way there, the school is only a couple of hundred yards from my house, when I had to send R on ahead. His bell had already gone and he panics if he's too late. By the time we had got to the crossing for A's school R had gone in. Little A started to get worked up now, because he hadn't said goodbye to R!! Uh Oh!
From there it escalated, he refused to cross the road. Luckily another parent was running late and I asked if she could warn his teachers that he wasn't coming without a fight.
One of the class teachers then came down to help me, but he was having none of it. With distraction, coercion and a little gentle nugging in the right direction, we got him to the yard, then into the class.
That is when the full on meltdown happened, at which point I had to leave him.....
Unless you've been there, you can't have any idea how hard it is to walk away from your baby screaming. Yes I know at nearly 5 he's not a baby, but he's my baby, that bit I know you all get. We're all either some ones baby or we have one.
I had to sneak away, so he couldn't see me, difficult because he was right by the door screaming.
His teacher had some help today, from a previous colleague that works in a special needs department of a local school. She passed me hiding behind some bushes, trying not to be seen...........that must of been a sight!!!
I know they manage his behaviour, I also know that he calms after a while.
I also know that I walked home from the school in tears again.....
xOjox
﻿
Posted by Ojo at 4:32:00 pm