Sooo, quiet day, kids fairly well behaved. Haven't done anything accept watch a crap film whilst cwching the hubs. So I thought I'd tell you why I hate late January/February.....yes really.

The first sign of things to come was the year I had my son, no that's not why I hate it!! Tut tut.
It was the middle of January 2008, the week before I was due to be induced on my 3rd child, I'd been diagnosed with diabetes, and as I've said before, he was getting a little big! Anyway, I was insulin dependant and injecting 4 times a day by now, also eating by the clock.
So at lunch time I made my salad, had my injection and put something in the oven to eat with said salad.

About 20 mins later I was ready for lunch, but could smell burning coming from my kitchen?? Waddling into the kitchen I see.....my cooker on fire!! Yip, real flames coming from my grill pan! I thought it would be like a chip pan fire, so I quickly flicked the cooker off, grabbed a wet cloth and opened the grill to throw it on top........can we all guess what happened next?? Hmmm??......
Oh yes the flames hit the ceiling.

Safety awareness 1. Don't allow air to get to to fire!

So in a blind panic I.......stand in my kitchen and stare at it.....ummm, Duh?! springs to mind, or baby brain.
I rushed to the front door, when realising that I was staring at a gas cooker on fire, at this point I realised a phone call would be sensible, so after my hubby didn't answer (yip, I rang him 1st!!), then I rang the fire brigade. Phew.
Stood on my front door and in a state of complete panic I attempted to flag down my neighbour, who was in his window. Now please keep in mind I was 8 months pregnant with a VERY big baby.
He sent his wife over!
Apparently he thought I might be in labor Haha! I wish.
She took one look at the smoke and ran back out to get her son, who grabbed my dogs blanket and threw it, wet, on my cooker.
Within minutes, the fire brigade was there, dragging water hoses and dirty boots all through my house!!! They made me go into my neighbours house, to calm down. At which point I realised I had taken my insulin and needed to eat, now I don't ask anyone for anything! Looking at my neighbour, and quite tearful by now, I did my best Oliver twist impression......."could I have a sandwich please??"
By now the firemen were getting a little concerned, I was pregnant and in a fire, so an ambulance was called.
By this time my hubby had made his way home for lunch. He'd caught the local bus, which had stopped at the end of our street, he couldn't get down it as there were 2(!!) Fire engines, I can only imagine the panic he felt when he realised it was our house they were outside!
He was with me when the ambulance came, on which they discovered my bp was in the 100's. Basically they took the mickey out of me for 10mins then took it again and it was relatively normal.
It sounds cruel, but it was a stupid mistake that had started the fire, I had put food in the oven......and switched on the grill...baby brain!
So with 2 fire engines, an ambulance and a police car, that had turned up for a nose! My house was a hub of activity and wrecked :-(.
My friend and hubby cleaned the worst of the mess up, but everything was ruined, the insurance man turned up the next day and agreed with the firemen that it was accidental. So we were given virtually everything to replace, it totalled approx.£17,000.
A week later I was sat in the maternity unit, waiting to be induced, picking my new kitchen from a catalogue! 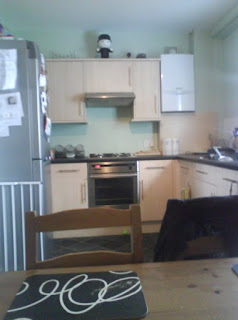 The next day the induction didn't work. At one point, after having an epidural, and telling my hubby to go and sort out the car as 'nothing would happen', the resus team had to be called to my room.......anyhoo!! My whopping 10lb6oz baby boy was delivered by emergency C-section, 3 weeks early, just before February began.
I came home to weeks of building work, a new baby and 2 children, as well as other stuff I've mentioned in previous blogs.
So, the 1st seeds of hate were also born for this time of year.
I shall tell you why they got worse tomorrow...
xOjox
p.s. my hubby just reminded me that, whilst rushing to get to the little one for a feed one night (so as not to wake me). Our bed also collapsed!! haha x
Posted by Ojo at 6:09:00 pm