What I do know is what I woke up to today.

As you know the gorgeous Mr. Ojo has been away working, he's back, and its all over, now I can say. He was working on transport for the Olympics, as much as I enjoyed the games, it has gone down in history as the worst 3 weeks of my married life!

Now, however he's home and everything is, as my youngest would say, back to normal.

I've had 3 weeks of children refusing to sleep or bathe or eat or........Basically anything they could control.
Their routine was gone, therefore they coped how they could...........and so did I, Just!!

So this morning,
All 3 children slept very well, particularly my eldest, who has really had his eyes opened to how hard his brothers can be the last few weeks. He's even told me he has a whole new respect for me!! Really meant a lot, not many 14 year olds would say it.

My middle boy got on with life as normal, in itself that was a step forward.
My youngest, well he woke up, climbed straight into our bed...........If you've read my blog before you will know this is HUGE!! 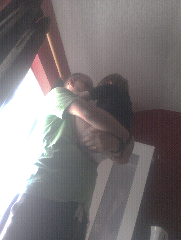 He asked his dad if he could 'climb' him.

I caught this on camera, just to show that there is joy to be found in all the little things, this cuddle is bringing a smile to my face as I type.

This was my boy accepting that his dad was home,
we're back to normal *sigh*.