He doesn't do well with large crowds or loud noises so a sports day full of 3/4 year olds and their parents was not the best place for him to be.  The teachers had said that during training he hadn't wanted to join in but had been quite a cheer leader.

I could tell on arrival at school he was a little agitated, he was running back and forth,  the head of nursery promised he'd only been doing that since the parents had started parading through, which was to be expected.

We all paraded in to the hall, soon to be followed by the children, and didn't they look cute! so little, the ones with competitive parents stood out, wearing shorts and trainers.  My little one found his own space and continued to rock and talk to himself, but again, to be expected, all in all he was coping very well!!

The races were so much fun to watch, my little niece managed to come 1st in the dress up race, even though she was playing with her hair and grinning at her nan the whole time!  My little one didn't want to join in but that's OK, he was in the room and coping.

He did manage to knock a little girl, accidentally, off a bench. This tends to make him go nuclear!! But one of the teachers intercepted and got him to hold the end of the finish rope, excuse the quality of the pic, but it has to be stretched and cropped to avoid other children's pics being posted here. 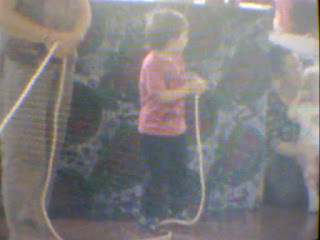 Apart from one little race where a teacher went with him and basically dragged him through, this is where he stayed, quite happy. This is fine with me, because he coped with his 1st sports day, and so did I................just!!!!